The Official Gazette is the official journal of the Republic of the Philippines.

This website, the national government portal, is updated regularly with speeches, reports, statements, press releases, and documents from the Office of the President and other departments of the Philippine government.

The Official Gazette print edition is published every Monday. Inquiries regarding publication in, subscription to, circulation, and claims may be forwarded to the National Printing Office.

Read about the history of the Official Gazette.

The Philippines is a republic with a presidential form of government wherein power is equally divided among its three branches: executive, legislative, and judicial.

More about the Philippine Government

The Republic of the Philippines is a sovereign state in archipelagic Southeast Asia, with 7,107 islands spanning more than 300,000 square kilometers of territory. It is divided into three island groups: Luzon, Visayas, and Mindanao. The Philippines was named after Prince Philip (later King Philip II) of Spain, by the Spanish explorer Ruy Lopez de Villalobos during his 1542-1546 expedition to the islands.

Fast facts about the Philippines

Check out The Philippines At A Glance for quick and easy access to information about the Philippine economy, poverty incidence, employment, infrastructure, education, healthcare, and the like, as well as some of the government’s most important programs.

Your source for government information and services.

Information about starting up and running a business in the Philippines.

Information for citizens of the Philippines.

Information for visitors and potential migrants to the Philippines.

Migrating to the Philippines

The Office of the Presidential Spokesperson (OPS) forms part of the national government’s communications arm. The OPS Secretary and Undersecretary speak on behalf of the President and are the primary sources of information regarding current issues and concerns related to the President.

The official chronicle, for the record, of the activities and undertakings of the Chief Executive on any given day.

This page provides links to officials documents and other information.

Holidays, observances, information during natural disasters, programs and policies of the Aquino Administration, and more.
These are documents that, in the judgment of the President of the Philippines, are deserving of publication and preservation for the historical record of the country and the administration.

Official Gazette of the Republic of the Philippines

National Government Portal – Edited at the Office of the President of the Philippines Under Commonwealth Act No. 638

These lists are based on reports from the National Disaster Risk Reduction and Management Council (NDRRMC). 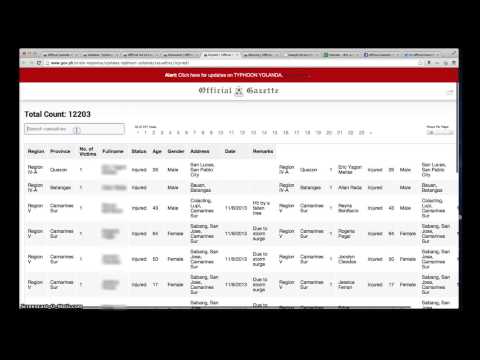